IMPORTANT NOTE: This site is not official Red Hat documentation and is provided for informational purposes only. These guides may be experimental, proof of concept, or early adoption. Officially supported documentation is available at docs.openshift.com and access.redhat.com.

How to deploy Jupyter Notebook

If you are not logged in via the CLI, access your cluster via the web console, then click on the dropdown arrow next to your name in the top-right and select Copy Login Command. 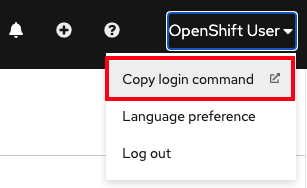 Copy the command under where it says “Log in with this token”. Then go to your terminal and paste that command and press enter. You will see a similar confirmation message if you successfully logged in.

Create a new project called “notebook-demo” in your cluster by entering the following command:

You should receive the following response

Equivalently you can also create this new project using the web console UI by clicking on “Projects” under “Home” on the left menu, and then click “Create Project” button on the right.

A pre-built version of the minimal notebook which is based on CentOS, can be found at on quay.io at:

The name of the latest build version of this image is:

Although this image could be imported into an OpenShift cluster using oc import-image, it is recommended instead that you load it using the supplied image stream definition, using:

Once the image stream definition is loaded, the project it is loaded into should have the tagged image:

To deploy the minimal notebook image run the following commands:

Deployment should be quick if you build the minimal notebook from source code. If you used the image stream, the first deployment may be slow as the image will need to be pulled down from quay.io. You can monitor progress of the deployment if necessary by running:

Because the notebook instance is not exposed to the public network by default, you will need to expose it. To do this, and ensure that access is over a secure connection run:

To see the hostname which is assigned to the notebook instance, run:

To delete the notebook instance when done, run:

To create custom notebooks images, you can use the s2i-minimal-notebook:3.6 image as an S2I builder. This repository contains two examples for extending the minimal notebook. These can be found in:

These are intended to mimic the images of the same name available from the Jupyter project.

In the directories you will find a requirements.txt file listing the additional Python packages that need to be installed from PyPi. You will also find a .s2i/bin/assemble script which will be triggered by the S2I build process, and which installs further packages and extensions.

To use the S2I build process to create a custom image, you can then run the command:

If any build of a custom image fails because the default memory limit on builds in your OpenShift cluster is too small, you can increase the limit by running:

and start a new build by running:

If using the custom notebook image with JupyterHub running in OpenShift, you may also need to set the image lookup policy on the image stream created.

For the scipy-notebook and tensorflow-notebook examples provided, if you wish to use the images, instead of running the above commands, after you have loaded the image stream for, or built the minimal notebook image, you can instead run the commands: